After finding that my MacBook Pro's battery required service and would no longer hold a charge I made an appointment with the Genius Bar at my local Apple store in Reston, VA. After a short wait Vilma (the Genius) called me up and asked what the trouble was. After I filled her in on the issue she reached into a drawer and grabbed an iPod Nano that was labeled "Battery Diagnostics": 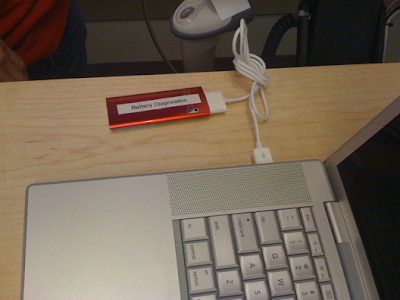 Once that was plugged in and she rebooted the machine she loaded up a diagnostic application and sure enough the status of my battery was decidedly bad: 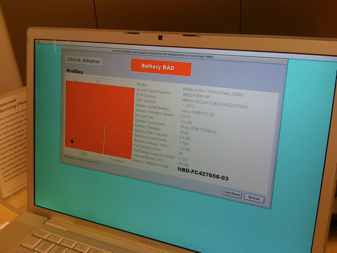 I bought this MacBook Pro in June of 2008 so it's nearly one and a half years old, yet still under the 3 year AppleCare warranty I purchased. She told me however that batteries are not covered under the extended AppleCare warranty unless the failure is a result of a manufacturers defect. Though she delivered the news in a friendly and empathetic way I was not happy.
Vilma could see that I only had 48 cycles on the battery and it seemed reasonable to me that this should be covered by the warranty. According to Apple a removable MacBook / Pro battery should be able to retain up to an 80% charge after 300 cycles. She pulled the information on the battery and left to talk to someone else, presumably a manager, explaining to me as she left that she would do everything she could to get it covered. A few minutes later she returned and said Apple would be replacing it under the warranty.
I don't know if she replaced it because it had a "manufacturers defect" or because it only had 48 cycles on it. Fortunately for me I didn't have to shell out $129 for a new battery. She popped in the new battery and fired up the diagnostics and sure enough, the new battery registered healthy. 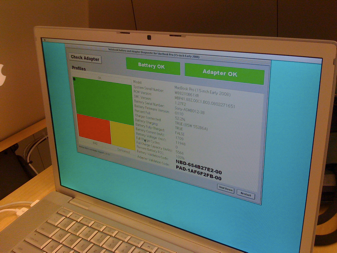 Ideal Battery Care
As we were wrapping up the battery replacement I asked Vilma how I should treat the battery to get optimal life out of it. Her recommendation was to cycle the battery constantly, running the machine on the battery almost exclusively. The seemed a little excessive to me but clearly leaving my MBP plugged in nearly 24 hours a day was not the right answer.
Apple has a page on battery care and their recommendation is that if you are not regularly running your notebook from the battery that you should do full charge / discharge cycle at least once per month. This apparently helps keep the "battery juices" flowing, which does make sense. They also recommend that if you are going to keep your MacBook powered down for an extended period of time that you leave it at about 50% power, which will help preserve the battery life.
I wish that Apple had made this information more apparent to me when I purchased my MacBook Pro; if they did it was likely just a footnote in the information I was provided. Telling someone that they need to manage their battery life does seem odd coming from a company that prides itself on simple "it just works" products. Apparently the latest generation of MacBook Pros with the sealed in batteries are not nearly as finicky when it comes to battery life, though Apple does recommend this charge / discharge cycle for them as well.
Personally I'm just happy I have a battery that can actually hold a charge again. I'll be setting up a weekly reminder to run a full charge / discharge cycle on my battery too, with another reminder to do a full battery recalibration per Apple's Support Knowledge Base.
Any suggestions on how best to make your MacBook's battery life last as long as possible? Please drop a note in the comments!

One reply on “Apple solves my MacBook Pro battery problem”

Apple solves my MacBook Pro battery problem: After finding that my MacBook Pro's battery required service and would… http://bit.ly/4Utm2d