I saw The Wrestler a couple of weeks ago and have been haunted by the images of Mickey Rourke as Randy “The Ram” Robinson the broken down wrestler trying for a comeback. While the gritty nature of the movie was difficult to watch at times I couldn’t help but see similarities between “The Ram” and the difficulties we as artists are facing today…or at least we think we are. There are three major take-aways that Randy “The Ram” left me with…

Giving up vs. sticking with it

On the surface this seems obvious…we never give up, we are taught to always stick with it no matter what. It doesn’t take long watching “The Ram” before we ask “How’s that workin’ for ya?” A couple of months ago I talked about knowing when to give up, when to walk away, and how to recognize when it is time. Seth Godin talks about knowing when to walk away in The Dip: A Little Book That Teaches You When to Quit (and When to Stick) by pointing out that life and business are a series of ups and downs some are short and some are long, we need to know the difference to be successful. Hanging in there  to long can turn us into our own version of “The Ram” while giving in to the impulse to give up when things get hard can lead to missed opportunities. Sometimes “staying the course” is good sometimes not so much…we need to be awake to know the difference.

“The Ram” chose to stick with it because of any number of reasons not the least of which was not knowing anything else…he made the mistake of thinking his body and his glory days could last for ever. How many of us felt the same way when we decided to become artists? Did you ever imagine your body would give out and you could no longer throw pots or “break iron”? In the end Randy “The Ram” was left ( he thought) with no choice which brings me to the second take-away.

The one trick pony

As the movie came to an end Bruce Springsteen asked

So I ask …how many artists are one trick ponies? How many of you rely solely on art fair sales or gallery sales to support your art making? For years we could get away with it, because our bodies let us and we were buoyed up by a sense abundance. We stayed in our studios, quite content to remain where we were and smugly told ourselves we were doing just fine we were above the need to sell our work. Until we noticed we were becoming the “one legged dog” and then……….

A recent survey by the NAIA reflected this tunnel vision  quoting artists blaming the public when the real problem was their own failure to recognize themselves as businesses and businesses sometimes need to diversify in order to grow and succeed. Many of the artists interviewed voiced a concern that they would have to get a “real job”, that may be true for some but not for all especially for those who have paid attention and did not become one trick ponies locked into their false sense of permanence.

Nothing is permanent, we always have a choice

This brings me to the final take-away, and that is we have a natural tendency to think that our world will always remain in it’s current state. We will always be able to throw pots, heft iron, or work a loom, people will always  flock to us ready to buy. So we don’t see a need to anticipate change because everything is great..that is until the trek from the van to our booth site starts hurting, or we have failed to catch a trend change.

So when you start to think about  giving up take a look outside your world and inside yourself and try to see if your lens is focused, and ask yourself… 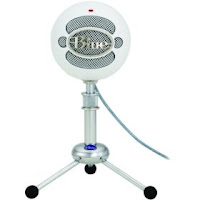 Lately I’ve been trying to build up some screencasts and found that the little RocketFish microphone I had was woefully inadequate. I had to doctor up the sound considerably with Audacity just to get it to come across reasonably well.

My friend Bob (who happily shares his marketing expertise) let me borrow his professional setup, complete with a Tascam US-122, a Sennheiser mic, filter and large desktop stand. He used to do professional voice-over work and after getting it up and running the difference was simply stunning.

Though I liked Bob’s setup, it was a little too much for my modest needs. Since I’m not an audiophile or accoustics expert I just wanted something that approximated the sound quality of a professional setup in a nice little USB based package. I hit up the local Apple store and the gentleman that was responsible for high-end creative applications said some good things about the Blue Snowball USB Microphone

. I jumped up to Amazon and bought one.

Enter the Snowball
The Snowball looks kind of like a, er, Snowball on a small tripod. All I needed to do was plug it in then drop into System Preferences / Sound, select the Input tab and then choose the Blue Snowball as my device. There wasn’t much more to it than that. 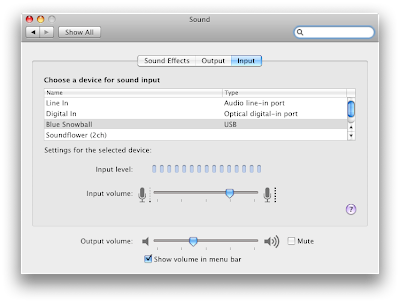 As far as sound quality goes I couldn’t tell the difference between it and the Tascam based setup I was using earlier. Again, I’m really just a layman when it comes to audio so to my amateur ears the Snowball sounded just as good.

The best part for me was that with the stand it sat between my keyboard and dual displays perfectly, allowing me to view what was on the screen during the screen casts without having to twist my head sideways to speak into the mic. Here’s what it looks like while I’m using my Mac: 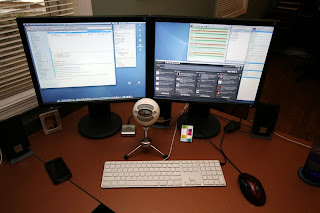 The Snowball’s stand is slightly adjustable. The top of the Snowball hits 9 inches at it’s lowest setting—which is what I use—and 10.5 inches at maximum extension. Just to round out (so to speak) the measurements, the ball itself is roughly 3.75 inches wide. If you are considering getting a Snowball grab a ruler and use those measurements to ensure it won’t block your screen if you want to use it like I am. My Samsungs are set at their highest level and this just makes it.

This is a really nice piece of hardware; it feels extremely solid and comes with a high quality USB cable. The screencasts I’ve been working on suddenly got much better and my everyday uses for the mic have improved dramatically. When I made a call to a friend I speak to frequently on Skype and asked if he noticed a difference his response was "clearly".

That summed it up nicely.

Do you have a mid to high-end microphone setup for your Mac? If so, please drop a note with the specs into the comments.