The folks at Mozilla have quietly trumped all the other browsers (with a notable exception) in the area of more correctly displaying colors in photos. So quietly,in fact, they aren’t enabling it in their browser without a minor hack of the registry.  Firefox by default in NOT color manged!

Turning on Firefox is very easy. Follow the instructions in this article by Datacolor, the maker of the popular color profiling Spyder tools and software, to exploit the new feature. You won’t be disappointed.

Should photographers start tagging their website photos with icc profiles and recommending Firefox, or serving content based on browsers? Great question. When you decide the answer to that, please login and add your comments.

When Apple released the beta version of Safari 4 I thought, "whatever". While I like Safari and find it to be a perfectly capable browser I am hopelessly addicted to Firefox with its extensions and add-ons. Then I started to see some of the articles coming out about the new Safari and two things got me interested: speed improvements and a new UI for tab management.

I pulled down the Safari beta and installed it on my MacBook Pro, which has 4GB of RAM and is running the latest version of Leopard. By default it installed over my existing version of Safari which I wasn’t too happy about. You can uninstall it and it will roll back to your previous version if you need it to but I would have liked to be able to run both concurrently. I’m sure there’s a strong technical reason that’s not an option. Quite a few users complained about problems with Mail.app, especially if they used Growl for notification support. In my limited time looking at it I didn’t experience any problems with Mail. Your mileage may vary.

Top Sites
The first thing that hit me (after the cool animation introducing Safari) was the Top Sites page: 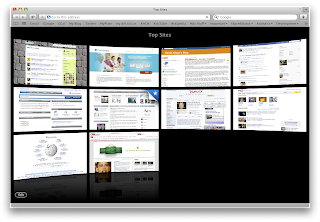 Typical of something from a Finder or iTunes Cover Flow view you can have nicely rendered mini web pages on a large black background that give you a menu of sorts for your most used web pages. While you can "pin" web pages into the view, move and remove those that you don’t like, the current beta doesn’t give you the ability to put a site in that you want. You have to hope it comes up for it to appear in the list and then pin it. Hopefully this is just a function of it being beta software. I was furiously removing sites and hoping Safari would give me one of my more recently visited sites but after a while it stopped offering suggestions (hence the gap where two web pages are missing in the image above).

There are small, medium and large views that hold 24, 12 and 6 web pages respectively. By default this is your home page so it will come up quite a bit, though you can of course set your home page to anything you like. There’s also a little button on the left of the toolbar that gives you quick access to it.

If Apple puts in the ability to manually add my own pages this will be a very nice feature. It would be even cooler if I could create groups of these "top sites".

The New Tabs
My initial reaction to the new tabs was that they were really cool. By moving the tabs into the caption bar Apple has effectively regained roughly 20+ pixels of browser real estate. All the caption bar was good for in the past was as a drag surface and title area anyway. This does create a bit of a challenge though: how do you move the window?

Actually, the same way you did before. Simply single click on any of the tabs—even an inactive one—and you can drag the entire Safari window. As you move the mouse into a tabs area you will notice the close button appears as well as a small textured area to the right of the tab. That textured area allows you to drag the tab out of the browser window and open a new window with that tab as the content area.

The single biggest problem I have with all of this is that if you open a lot of tabs (I often have 10 or more open) then clicking in the caption bar means it’s really easy to accidentally hit a close button on a tab. It’s almost like a game of whack-a-mole except with browser tabs:

Dan Frakes at Macworld has a really good article about Safari’s new tabs: Good or bad? He covers this topic in a lot more detail than I do.

I would love to see Apple add an option that would allow me to turn off the close button for non-selected tabs. That would mean less of a chance of hitting the mole, er, close box on accident. With screen real estate always such a premium I do like the way Apple is tackling this though; it just needs a little tuning. Since this is going to set the standard for OS X tab metaphors moving into the future I’m sure Apple appreciates the gravity of these kinds of decisions.

Performance
The Webkit folks did some major tuning on Safari beta 4; the speed is simply stunning. How much faster is it? If I load my primary blog page (www.davidalison.com), which generally has my last 7 blog posts on it with some fairly complex tables, DIVs, images and poorly designed HTML it takes nearly 4 seconds to completely render in Firefox. Safari 3.2 would complete the render in roughly 3 seconds. The beta handles it in roughly 2 seconds.

Web pages are noticeably snappier and pages that have some of the more complex DIVs for representing things like charts fly up on the page.

Breaking Points and Extras
There is one add-on I use in both Firefox and Safari religiously and that’s 1Password. Unfortunately it needed to be updated once the beta was released; fortunately the Agile Web Solutions folks knocked out an update within days that fixed it. There are other plugins that have needed to be updated as well but most of the popular ones appear to have been patched already.

Macworld recently put together an article on some of the hidden preferences for Safari. There are a couple of items in there that can help you customize Safari a little more.

All in all I’m pretty pleased with this new version of Safari, especially when taking into account that it’s a beta release. I don’t know if I’ll switch from Firefox being my default browser, though if Apple can tweak some of the UI issues and still maintain that incredible speed advantage I may just reconsider that.

What’s your take? Do you like the new Safari?

When I was a Windows user I went through several generations of browsers. Starting off with Mosaic, then on to Netscape Navigator and finally, since I was a hard core MS guy, Internet Explorer. Of course back then we called the early versions Internet Exploder because the thing would frequently crash in spectacular ways. Over time Internet Explorer improved and became fairly stable, though it had a huge number of security holes that Microsoft could never seem to get on top of. Once Internet Explorer became the defacto standard on the Windows platform Microsoft stopped innovating on it and focused on fixing security issues. It was about this time that Mozilla put out the first versions of Firefox and suddenly I had a reason to consider something other than IE. Firefox was quick, had a tabbed interface that IE didn’t, didn’t have the security holes that IE had and was, for the most part, able to present most web pages just as well as IE. I quickly adopted Firefox as my default browser and for the next couple of years watched as Microsoft slowly realized that they needed to put a lot of effort into their new browser. Firefox always seemed to be one step ahead of IE, adding great new capabilities like skinning, plugins and extensions that were really handy. Enough Windows History – What About Mac? When I switched to Mac I figured I would also use Firefox instead of Safari. It was actually the very first application I installed on my new Mac. After playing with both I was surprised to find myself using Safari as my default browser. My use of Firefox was limited to my development work where some of the extensions for Firefox come in handy and the XML viewer that’s built in makes life much easier. What didn’t I like about Firefox? It was considerably slower than Safari when loading and rendering web pages. The UI did not feel Mac like, with a toolbar that looked like something from an older Windows application. I love the clean, crisp UIs that Apple produces and while some think that Safari is spartan, I think it’s just clean and uncluttered. Firefox also rendered form components on a web page very differently than Safari. While Safari’s pulldown lists and buttons inside a web form looked just like any other Mac UI, the Firefox versions of those buttons looked like something from an old Windows 98 machine; square, gray, flat buttons. Out Comes Firefox 3.0 The recent release of Firefox 3.0 meant that I wanted to check this out again and see if Firefox deserved a spot as my default browser. I installed it over my previous version and started playing around. Note: If you are a 1Password fan like I am you will need to open the preferences in it and reset it in the Browsers section. The first thing I noticed is that it is considerably faster than the previous version. I didn’t do hard core testing—just some subjective stuff—but found it to be nearly as fast as Safari. The UI has also been updated, making it look much more like a traditional Mac application. I particularly like the tab and toolbar rendering:

I also found that the web forms that Firefox used to generate are now being presented with traditional OS X looking components. This was a big deal for me so I was quite happy to see that in 3.0. The Firefox team also added a cool searching feature. Click on the down arrow just on the right side of the address box and up pops your standard list of recent addresses. If you begin to type any matches found—both from your history and your bookmarks—appear in the list. It’s kind of like a browser specific Spotlight search. Very cool. There are three key Safari features that I don’t have in Firefox though: 1) Dictionary Lookup 2) Drag and drop in web file upload forms 3) Snapback Of these only Dictionary Lookup is tough to live without for me. Given the advances that Firefox has made I am going to spend the next week playing with this browser to see if it can indeed become my default. Using it for the bulk of the day yesterday leads me to think it has a pretty good chance.