When Steve Jobs announced the iPad a few months ago I didn’t think “Wow, I gotta have me one of those…”. Though I was intrigued by the form factor and slightly motivated by Steve Jobs’ demonstration of the device, it didn’t scream out at me as something I needed. I was actually more amused with all the criticism surrounding the choice of iPad as the name for the device.

I yawned and went on with my life.

Nearly a month ago I walked in to our local Apple store with my family. We weren’t looking for anything in particular, just letting my kids fawn over the Mac hardware as we thought about buying a MacBook for my son before he heads off to college. I asked one of the Apple store employees if they had an iPad I could take a look at. He handed me an 8 x 6 inch card with a picture of one on it. The device was far thinner and lighter than I expected.

He then asked if I would like to reserve one.

Apple Employee: “There’s no commitment. It just means that we’ll have one here for you in case they sell out. That way you can come in on launch day and be assured you will have one.”

Wife: “Well, maybe you should sign up in case you really want it.”

My wife is usually the uber-frugal one when it comes to technology purchases. I’m the good cop, she’s the bad cop. She is the voice of reason when the “I WANT IT” klaxon sounds off. When she flashes the green light—which she clearly was doing—I jump before she reconsiders.

Seconds later I had a 16GB iPad reserved for April 3, 2010. Besides, there was no obligation, right?

The morning of April 3, 2010 passed without incident. I didn’t find myself in a line outside the Apple store, nor did I feel this overwhelming need to run out and buy an iPad. The impulse of signing up to reserve one didn’t translate into the action required to go out and get one. I read my news feeds, saw people writing about it and was mildly interested.

I was driving by my local Apple store—really, just happened to be in the area—when I decided to pull in and actually see an iPad in person. I walked past the abandoned rope line and cart full of water and cookies the Apple staff had put out to cater to line standers.

Inside the place was mobbed. There were people queued up to see the demo iPads several layers deep. I looked over people’s shoulders and watched them play with the iPad for a short while before I became impatient, went to the back of the store and asked that they sell me my reserved iPad. Within 10 minutes I was walking outside with my new iPad and an Apple case for it.

It all happened a lot faster than I expected. I blame my wife for not talking me out of getting one.

There are hundreds—likely thousands—of reviews on the iPad already. I’ve found the vast majority of them very accurate and reasonably consistent on features and functionality. The bigger issue to me is, what role does the iPad really fill? Is it something you would find useful?

I’m on my computing devices all day. I have a large, dual monitor Mac Pro for software development. When I’m on the road I carry along a 15″ MacBook Pro. I also carry a 3GS iPhone. Between these three devices I had pretty much every need covered.

All of three days into owning an iPad I’ve found a niche for it that works great for me: information consumption. Here is how I’m using the iPad:

In the morning I flip open the case on the iPad, set it up at a slightly elevated angle and fire up e-mail while I eat breakfast. I rarely respond first thing in the morning; I just delete the useless e-mail and file away the informational stuff, which the e-mail client on the iPad is perfect for. When I’m in the office is when I actually respond unless it’s very trivial. I then fire up my iPad based Twitter client, currently Twitterrific. Since I follow lots of news oriented feeds I’m able to quickly scroll through items and catch up on the news. If I find a link to a story that I want to read I tap it and Twitterrific displays it in a windowed browser.

This is where the screen on the iPad comes in handy; it doesn’t feel at all cramped. Though I always marveled at my iPhone’s screen resolution, it suddenly feels highly constrained next to the iPad: 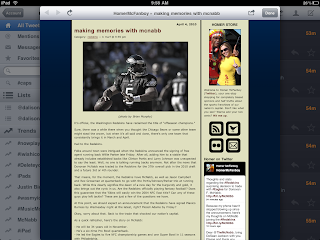 Could I use my MacBook Pro for this? Sure, I could. It just feels so bulky. Could I use my iPhone for this? Yep, sure can, though I trade in supreme portability for a tiny little screen.

The iPad has a super long battery life from what I can tell so far. I charged it to capacity on the initial sync and have been using it pretty heavily for the last 3 days, yet as of this moment it’s sitting at 25% capacity. It means that I’ve been treating it more like a book, leaving it out to be grabbed as I need it, not constantly tethered to a power supply like my MacBook Pro is.

As a result, I kept the iPad handy throughout the day, grabbing it when I wanted to quickly scan sports updates or read through news feeds. This is the ultimate lazy Sunday, information appliance I’ve ever seen.

I even fired up the iBooks application and—after playing around with some of the ancient free books available—bought a new title (The Pacific by Hugh Ambrose). Using the iPad as an e-book reader is very nice; the text is far more readable than on a Kindle, though I have only tried using it in shaded areas. I don’t see sitting on a sunny beach and reading on the iPad unless you have a large umbrella handy. Way too much glare.

Whether an iPad is right for someone is obviously a very personal decision; will you use it enough to make it worth the investment from a cash and time perspective? On the want versus need scale an iPad falls far more into the want category. It is far easier to justify a laptop or smartphone than an iPad since they are accepted tools of modern information workers. Will the iPad become a tool of the modern information professional? Perhaps, though it’s not likely to happen with this initial version.

My experience three days in is that I am really enjoying my iPad and see that it has added a quality to some parts of my daily routine that were missing. I’m looking forward in the coming months to exploring the various applications available for the iPad as well; the few that I have played with have been very useable and take full advantage of the iPad user experience.

I’m really glad my wife talked me into getting one.

Thinking of getting an iPad? Not sure if it will work for what you want to do? Got one and using it in a unique way? Please add a comment below!