One of my favorite pastimes when I was purely a Windows guy was playing games on my machine. In fact, my last Windows machine was designed from the ground up to be a gaming rig first and foremost—with gaming being a very demanding application type, everything else I needed to do was easy. About the time I got into Macs I was burnt out on the gaming scene, switching my down time to playing with my new Mac and working on this blog. Lately my favorite game from the Windows platform—Team Fortress 2—received a significant upgrade with some new game types, maps and features. I decided to check it out and see if it was as fun as I remembered.

TF2 is one of the most compelling multi-player, first person shooters I’ve ever played, right up there with Battlefield 2. The teamwork required to play it is pretty important to success, the player classes provide a wide range of styles for approaching the game and the graphics, music and effects are laugh out loud funny. The only problem? I couldn’t play it on my now standard Mac platform, at least not without a little help.

I don’t run Bootcamp because I’m not a big fan of rebooting my Mac Pro every time I want to run a Windows application. I tried using VMware Fusion to load up the game but even with the new beta installed I got terrible frame rates. I’m sure this has something to do with the video drivers that VMware is using.

Rather than trying to tweak VMware and get it to work I decided to give Crossover Games a try. They have a version specially designed to run games on Intel based Macs and had TF2 listed as one of the games they support. Crossover is based on Wine, the open source tool that allows you to run Windows applications on a Mac or Linux machine without requiring Windows.

I decided to try this out on my Mac Pro since I don’t anticipate gaming on the MacBook Pro. The installation was pretty straightforward though encompasses a number of steps, all handled by the installer. It didn’t take me long at all to get Steam (the application platform for launching a number of great games) up and running. I had to download the latest version of the game itself and then I was off to the races.

I was able to run it in full screen mode (1600×1200 resolution) and it worked like a champ. Excellent frame rates, no visible tearing and was very responsive. It took a couple of attempts before I was able to get it to run in a window but once that was configured correctly I got decent results, though it was a little jumpy at times: 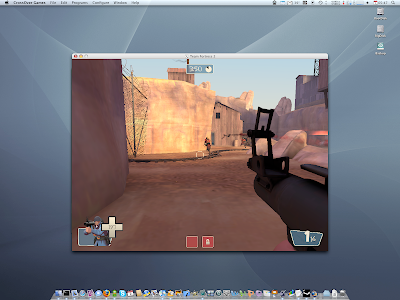 For actual game play I’ll likely run this in full screen mode. I had some problems connecting to servers initially, each telling me that the server was not responding. After trying about a half-dozen servers I was able to get in one, then after that I was able to get into nearly every one that I tried. Not sure what’s up there.

Crossover Games is a nice little product for the $39.95 price. It’s not nearly as smooth as running the application directly in Windows and it has some little window artifacts that pop up here and there. I’m running this on some pretty serious hardware (Mac Pro, dual 2.8GHz Xeons, 12GB RAM, scads of disk space) so I’m not sure how well a lesser machine would handle it.

On the bright side Crossover Games has a 7 day free trial so if you happen to have a PC game that they support it may be worth checking out. Oh yeah, TF2 is still a complete blast to play. Just watch this video to get an idea of the sense of humor the designers of the game have: